The Curious Nature of Freedom 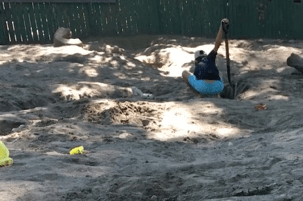 “Children need the freedom to appreciate the infinite resources of their hands, their eyes, and their ears, the resources of forms, materials, sounds and colors.”

I almost missed it. I expect I may have been the only one in the park that morning who did see it, who did hear it. It was one of those moments in time that was barely there – just a few minutes long – and yet it keeps coming back to me like an uncomfortable movie scene that causes me to squirm but also look more closely.

The nature of freedom

As part of an Ontario Reggio Association course I was taking, I had been observing interactions of mostly children and families in a large community park. I had gone to observe with a research question of “How is freedom expressed by children?”

I had been chatting with some parents in the park – parents who seemed to be curious about what I was doing, but mostly I had been sitting quietly and taking notes for a little over two hours in the warm summer sun. I knew it was time for me to reconvene with my colleagues. But I wasn’t quite ready to leave the sounds of laughter and energy that were driving a building project in full swing in the sand pit.

The sand pit in this community park was huge, about the size of a soccer field. A tree grew up inside this area that was deep with sand. There were logs and tree limbs, and pieces of 2 x 4 and 2 x 6 lumber for children to use. Buckets, shovels, rakes and diggers called silently but powerfully to the children as tools they could use to build and create, to share with others, and to come back to another day.

Their enthusiasm was contagious. In less than five minutes a whole host of other children joined the construction project as workers and design experts. 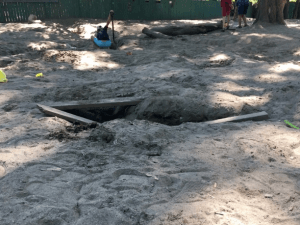 The building project that had captured my attention and tethered me to the sand area in a note-taking position had sprung up spontaneously when one mom decided to get into the sand with her young son to help him dig. The two of them had the idea that they could create a river through the sand if they made a good trench. They shouted out excitedly at both their successes and their disappointments.

Their enthusiasm was contagious. In less than five minutes a whole host of other children joined the construction project as workers and design experts. There was a tap at one end of the sand pit where children could collect water with buckets. Soon there were twelve trench diggers and five water haulers, all problem-solving and collaborating to build a good trench where a child-made river could flow through the sand area. 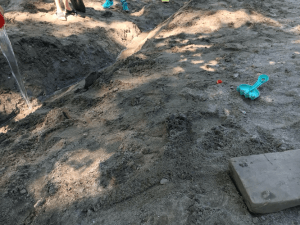 It was in this context that I noticed what appeared to be a grandfather sitting at the edge of the sandpit, his 18-month old granddaughter happily digging in the sand near his feet. Both were within a few meters of the tap where those five water carriers were busy filling their buckets with water and transporting this valued commodity to their child-made river.

The 18-month old seemed barely aware of the communal efforts of the other children, so engaged was she in digging and moving shovelfuls of sand from one spot to another in her squatted position. She seemed to be experimenting with her digging technique, trying out the effectiveness of shovelling with one hand and then the other, and then both.

And then she spied a digger just four knee crawls away. She put her shovel down, crawled to the digger and dragged it back to the piles of sand she had made with her shovel. Her eyes focused on the construction vehicle’s long-hinged arm and cup-like bucket.  She nestled the digger in between her legs and experimented with how she could make the bucket nod and the long arm stretch and bend. Almost by accident, it seemed, the bucket scuffed the top of the sand between her legs and scooped up a small quantity of sand. She glimpsed the power and purpose of the digger. Pushing the digger’s bucket deeply into the sand with both hands she experimented with how to nod the bucket and twist the arm to capture sand.

It was then that I heard the grandfather warn his 18-month old granddaughter that she was making a mistake. “If you put that shovel down, someone is going to take it.”

I watched as this little girl looked from her digger to the shovel and back again. She picked up the shovel without letting go of the digger. She tried to work the digger, but she couldn’t. She didn’t have the strength or dexterity to manage both the shovel and the digger at the same time.

And now, she couldn’t use shovel or digger successfully, meaningfully or joyfully.

In this park with a massive sandpit, ample water, and activities all around that were built on collaboration, she was suddenly confronted with the idea of scarcity, of fear at not having what she needed. She was suddenly presented with the value that her individual needs were more important than the needs of others, that individualism trumps community.

I closed my notebook, put away my pen, and walked slowly back to the rendezvous spot with my other note-taking colleagues.

Why, when my intention was to seek how freedom is expressed by children, had this unremarkable adult-child interaction become unforgettable to me? Through reflection I have begun to see why.

Learning is driven and deepened by curiosity. I had witnessed the granddaughter’s curiosity bubble up from the very essence of her being.

How does it feel?

How can I move it?

How can I use tools to help me create and build?

What always happens as I dig, dump and flatten piles of sand? (What is gravity?)

Initially she had experienced freedom to experiment with all the ideas and wonderings that had come to her. And then, in one short statement; one brief, well-intentioned warning of consequence by her grandfather, her freedom to be curious had evaporated.

I was struck by how simply and profoundly that we as adults shape children’s understanding of freedom and their appreciation of the infinite resources that envelope them.

I am still thinking about this day in the park and I am still wondering: Does freedom exist if children are given answers to questions they haven’t asked?