Literacies at Play What is Literacy? (the plot thickens) Wampum Belt

Let’s consider whether art is literacy using an historic example.

The first agreement between the Haudenosaunee and the Europeans who came to Turtle Island (North America) was completed and recorded by the Haudenosaunee using Guswenta, the Two Row Wampum belt. At that time, Indigenous peoples and European settlers shared no common written language. The Haudensaunee recorded their agreements with settlers by creating beaded belts.

The Wampum Belt, used small purple beads to symbolize two canoes traveling on each side of the river. One canoe represented the Iroquois Nation. The other canoe represented white settlers.  These two rows of beads signified that both would share the river (Canada’s land and resources) but they would travel in parallel. Neither would interfere with the other. In between these two purple beaded rows were three rows of white beads representing “peace”, “friendship” and ‘forever.”

Wampum belts were used as non-textual binding contracts between other First Nations and settlers too. Though politicians and peoples in Canada grapple with treaty rights, truth and reconciliation, the Wampum Belt continues to be a record of shared understanding over time.

The Wampum Belt: A Nation to Nation Relationship 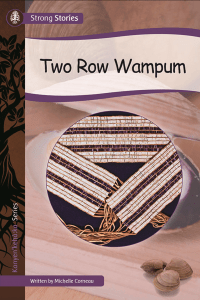 Can artistic expressions such as wampum belts be literacy?

Previous Topic
Back to Session
Next Session
×

Dive straight into the feedback!Login below and you can start commenting using your own user instantly